The delegation first came to the product display floor of Zoomlion Industrial Park in Zoomlion, and experienced the new 4.0 product of Zoomlion. They all praised Zoomlion for â€œmaking a world-renowned good equipmentâ€; "Eye of the eyes" exhibition area, after watching the development process of China Construction Machinery and Zoomlion, the delegation applauded Zoomlion's rapid growth miracle over the past 25 years; Zoomlion's 3,200-ton crawler in the "IoT Spacetime" exhibition area. The self-adjustment and self-adaptive function of the crane made the hoisting error less than 2 mm, and successfully hoisted several large nuclear power domes, so that the delegation praised Zoomlionâ€™s high-tech smart products. 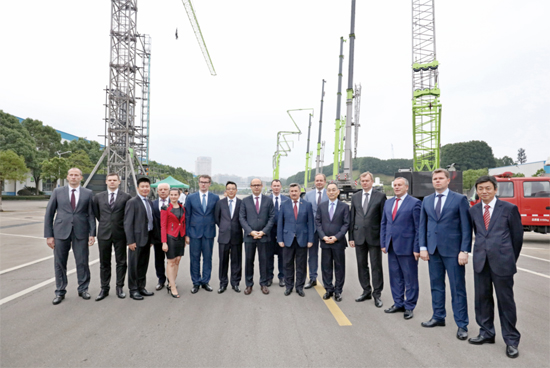 After the tour was over, Domanevsky wrote a message to the blessing: â€œWith a great interest to visit Zoomlion, Zoomlion achieved a very big development in just 25 years and became a world famous. The company hopes that Zoomlion will achieve even greater achievements in the future!"

It is understood that the state of Mogilev is located in the center of eastern Belarus, and the city of Mogilev, the capital of the state, has a history of 750 years since its founding. Mogilev Free Economic Zone is one of the six free economic zones in the country. Machine manufacturing plays an important role in the stateâ€™s industry.

Zoomlion, as a leading enterprise in Hunan Province, is a beautiful card for China's equipment manufacturing industry. Through practical actions such as the establishment of a joint venture company with the Belarusian MAZ Group, it has created value for both parties. Mutual benefit and win-win results deepen the friendship between the two parties.

In fact, Zoomlion has long been known as an "old friend" in Belarus. As early as May 2015, Zoomlion closely followed the â€œBelt and Road Initiativeâ€. Under the witness of the two heads of state of China and Belarus, it became the first Chinese-funded enterprise to settle in the Zhongbai Industrial Park; after that, Zoomlion and the local MAZ, a veteran heavy-duty manufacturing company, cooperated and cooperated with each other and produced various products such as construction machinery and sanitation machinery. In the two years, Zoomlion and Belarusian companies continued to develop mutually beneficial cooperation and develop a win-win situation. This has become a model for China's equipment manufacturers to actively â€œgo globalâ€ and seek international capacity cooperation.

A series of cooperation between Zoomlion and the Belarusian government and enterprises will surely create more value and carry more friendship for the two peoples. (This article comes from Zoomlion.)

3.Easy programming and can directly use the program data made by lofting software.

4.Computer with Chinese/English interface, easy operation, and can display the drawing of

5.All marking, punching and shearing in automatic completeness, all finished angles can be

unloaded by pneumatic turnover device so as to lighten the working strength.

6.Only need to input size of workpiece, diameter of holes, stadia and quantity of workpiece

7.The angle line installs supporting & pressing device to meet the requirements of processing

8.Marking unit adopts closed frame with good rigidity. Marking stadia can be set at will.

9.With avoided shearing functions, so as to process fixed-length angles.